Glastonbury in the 00s… 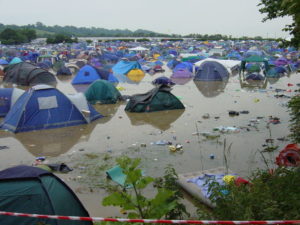 This years Glastonbury Festival is well underway, fingers crossed it doesn’t rain too much! So how about some more history… we’ve now made it to 1999 so what happened in the 00s….

Throughout the 00s the festival raised £1000s for Greenpeace, Oxfam, Water Aid and many more local charities.

More and more stages and fields were added, including the Dance Village and The John Peel Stage.

The festival was becoming incredibly popular, in some years the tickets sold out within 24 hours!

Once again there were a fair share of muddy festivals… particularly 2005 where 2 months of rainfall fell in only a couple of hours, flooding many areas of the festival!